Will Williams in Vietnam

Since Will Williams became an officer of the National Alliance in the early 1990s, it has happened from time to time that someone would try to cast doubt on his military record. For example, Dr. William Pierce wrote in the National Alliance Bulletin of November-December 1992 that one such detractor "has insinuated in his recent letters that our Membership Coordinator, Will Williams, is ... an imposter who falsely claims to be a former Special Forces officer."

Here are some facts.

Lieutenant Will Williams was stationed at a Special Forces camp A-414 near the village of Thanh Tri, in a border-area west of Saigon nicknamed "the finger" because it formed an indentation into Cambodia. The dozen or so American Special Forces soldiers assigned to this camp became known as the Defenders of the Finger. 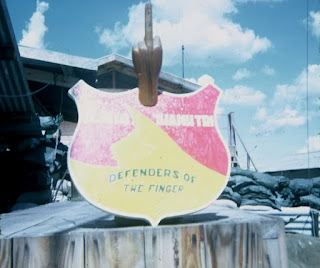 This plaque, made while Will Williams was in Vietnam with a carved hand that he bought in Thailand, represents Vietnamese territory in yellow and Cambodian territory in red, and shows the anomaly in the border known as "the finger," where the base was located.

Because of its proximity to Cambodia on three sides, the base was frequently shelled by the Viet Cong, who used Cambodia as a refuge. Whenever that happened, somebody would have to run to the top of a steel observation tower called "Silver Star Tower," (because whoever would climb that tower while the base was under attack deserved a medal) to try to determine whence the fire originated.


Ten days after this battle, Lieutenant Will Williams was promoted to Captain.
Posted by Hadding at 6:32 AM 1 comment: