One of those that Harold Covington defamed incessantly in the 1990s, Will White Williams, responded by filing a libel suit against Covington in Wake County, North Carolina. The pattern of libel was so clear, extensive, and well documented that Covington really had no defense.

Instead of disputing the facts of the case, Covington tried to appeal to what he presumed to be the biases of the court.

In his formal response to Williams vs. Covington in 1996, Harold Covington referred to Williams, a member of the National Alliance, as a "White Supremacist" (which in this case was not to make a distinction from White Separatism, but simply a synonym for racist in Liberalese) and asserted that "White Supremacists" and their activities were inherently "disreputable and unsavory" and that therefore he, Covington, should not be held accountable for any libel against a "White Supremacist" like Will Williams:


18. Regarding the issue of defamation of character, it is the entirely serious contention of the defendant, and will constitute a substantial portion of the defense, that the plaintiff has no character to defame. For a number of years Mr. Williams has voluntarily adopted a style of life which has involved active membership and leadership roles in a number of white supremacist organizations. This subsequently resulted in his involvement in a series of transactions, incidents, and episodes of such disreputable and unsavory nature that the standards of injury and loss of reputation which would normally apply to a normal, law-abiding citizen cannot reasonably be said to apply to him. With addressing the moral issues involved, the court will be aware that modern American society has determined, in its collective wisdom, that white supremacy and activities related to promoting white supremacy are disreputable and unsavory ‘per se.’ It is the contention of the defense that by choosing his present mode of living, in the eyes of all reasonable people he has voluntarily renounced the values and standards of character which would entitle him to bring an action for libel, against the defendant or anyone else.

Find that on page 2 of "DEFENDANT'S ANSWER TO COMPLAINT" (File #96CV 11027 – Williams vs. Covington), filed at the Wake County Courthouse, North Carolina District Court on 20 November 1996. 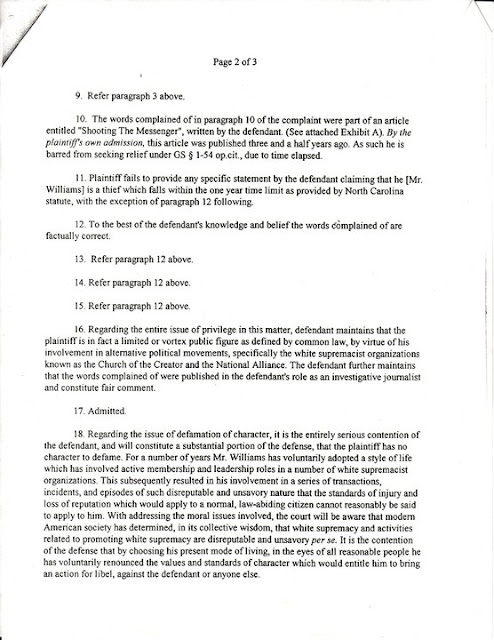 Page 2 of Covington's Response to Williams vs. Covington.
Posted by Hadding at 6:29 PM No comments: