Did Harold Covington serve in the Vietnam War? 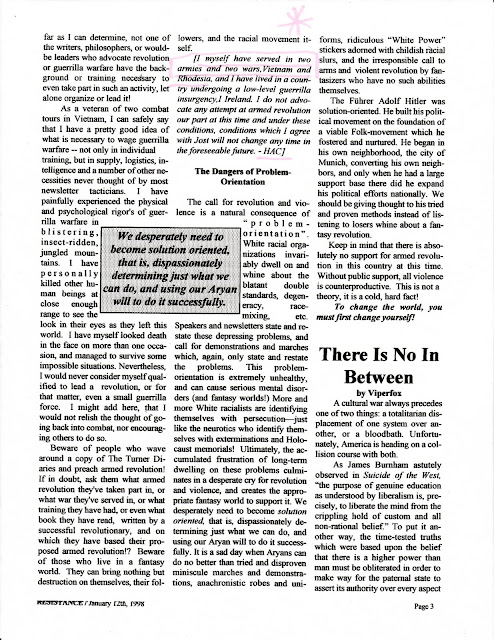 In his Resistance newsletter of 12 January 1998 Harold Covington says that he served in two wars, Vietnam and Rhodesia. In fact, although he enlisted in the United States Army during the Vietnam War, he was given a medical discharge, based on a diagnosis of paranoid personality disorder, before he could be shipped out. That is all according to his brother, Benjamin Covington.*

There are conflicting accounts of what Covington did in Rhodesia. He says that he was a combat-soldier. Brother Benjamin says that to the best of his knowledge, Harold Covington was a file-clerk in Rhodesia:

In different blogs and writings, he was always bragging, "Oh, I was a mercenary in Rhodesia and I went out and did all this fighting." But to the best of my knowledge, according to the letters he wrote to my parents, he was a file clerk. He certainly never fired a shot in anger.

* "Little Big Man," interview by Sonia Scherr and Laurie Wood, Intelligence Report,  Winter 2008
Lest anyone get indignant about the SPLC being used as a source on Covington, bear in mind that Covington's A Brief History of the White Nationalist Movement  uses the SPLC as a source in at least three sections, quite extensively in the section on David Duke. The lengthy utterances of Benjamin Covington are directly quoted in the piece; it is not the SPLC's interpretation.